another victory for manny pacquiao 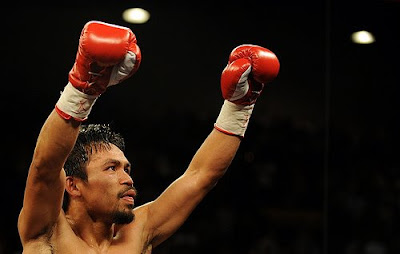 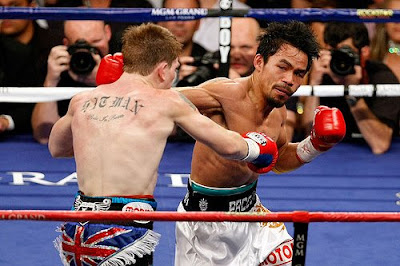 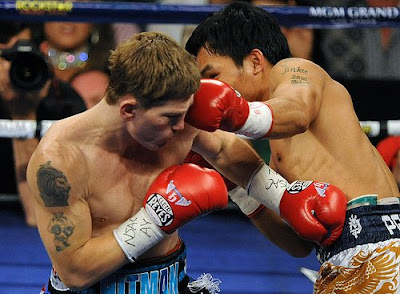 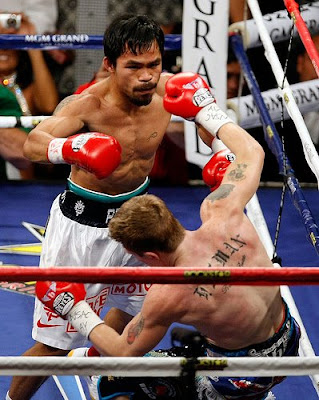 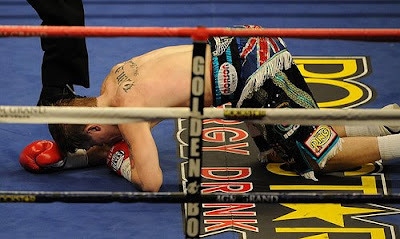 Yep,it did -- in MGM Grand in front of 16,000 people --and it did so with the left hook of the "the best pound for pound fighter, Manny Pacquio.

"Pacman" first shook "the Hitman" with two knockdowns in the first round --making us all jump up and down for joy -- and finally pounded the bridge down to the ground on the second round at exactly 2 minutes and 59  seconds with his left hook, landing perfectly on Hatton's right jaw -- resulting to a TKO.
How it happened- ehem
Manny Pacquiao displayed great control and discipline in throwing out his punches as he sweetly took his time waiting for the right timing even after the first two knockdowns in the first round. Had it been me, I'd be impatiently gritting my teeth to punch him again to put his light out..
Pacquiao used a right-left-right combo and a follow up uppercut to the jaw combination for the first knockdown and an overhand left for the second one.
Hatton fell into the trap of avoiding the left only to be surprised by Manny's powerful right paw hook making him bleed in the nose before finally greeting the parrallel world after Manny gave him a left hook, so powerful it rendered Britain's boxing pride flat and unconscious on his back for a few minutes--  No, the 3 knockdown rule is not applicable in this bout -- but it doesn't really matter now, does it?
After checking the unmoving Hatton -- The referee, Kenny Bayless then announced Manny Pacquio the winner by TKO.
woohoooo!!!!
In this fight, Ricky Hatton lost his IBO Light Welterweight Title and Ring Magazine Junior Welterweight Title -- ending his four-year reign as a Champion in this division. This is Hatton's second major loss after Mayweather Jr. and a great win for own People's Champ.
I was expecting a longer interesting fight, Hatton is after all a very good fighter, undefeated in the Light Welterweight Division and has been a champion 15 times in various categories and division.  In fact, in the scorecards, Hatton gave out 18 blows compared to Manny's 8. -- but what the scorecard cannot display is the force of each blow and the power of the punches rendered. Sometimes, the one that bears the higher number in the card doesnt come out the champion...
I was actually nervous, thinking Hatton might be a tougher opponent...Before I say anything else -- let me be clear -- Im still expecting Pacquiao to win(haller! =P) but I'm expecting a bloddy wittle show to entertain me -- you know a little cut on the brows, a mugged face, and maybe swelling ankles?  I mean, the write ups and background on this Hatton is quite impressive, I don't think he was called "The Hitman for nothing -- duh...
And when Hatton first came out, he projected an image on the screen to be someone so tough, you'd be running home to your daddy after you hear him growl (no he didn't growl but his music to his VTR before his introduction was kinda impressive except that it ended with this old song I hear my uncles would sing in videoke-- I know it -- arrghhh - forgot the title...grrr).
Anyway, let's leave the song behind -- Hatton was all serious and displaying his prowess with the way he stand and walk and pose...compared to the goofy shy look of Manny who came out smiling as if he's attending a graduation!
I was shaking my head and everybody in the theater was laughing when we first saw him -- he had this kiddie expression on his face especially after he found the camera and shyly smiled as if it's his first time to be on tv - damn! almost expected him to even wave!-- good thing he did not. Hahaha. And to think Times Magazine named him in their 100 Most Influential People around the World!  sheesh.
-- so what's next for manny? Vacation he answered hahahha! but there are talks of Mayweather coming back from his retirement to box against Morales...Oh yes, the same Morales who gave Manny the hardest time in the ring many months ago...  Talks of rematch are being buzzed but this time with Mayweather Jr. in the scene.  Manny has been bouncing from one division to another, always leaving a victorious mark --- and it seems as if he's defeated one champion after another -- and Mayweather may pose to be another challenge to conquer... could it be? think he might be the next to fight against Pacman after his Morales bout? well that is if he wins against Morales... If Morales wins--- hmmm wow...Either way - that is something worth hoping for.
Can anyone tell that I am smiling widely right ow as I am writing this post? yep I am - ----awwwoooooo! one great hoot for a great fight and for the greatest fighter there is!

--- oh -- BTW before I forget --
anyone saw the fight of Soto? his bout was the last one before Pacquiao and Hatton's bout.
It was great. He is a new favorite.  Young, only in his 20s and hungry for life.  I'm gonna be waiting for this kid's moment in the limelight--- and his first name is Jesus -- yep... Jesus Soto Karass -- that should tell you there is something in this kid ^.^

--photos after the fight--
Can you tell we all went out of the theater happy?! ^.^ 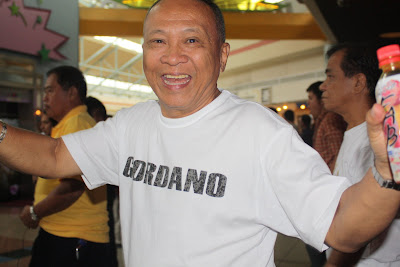 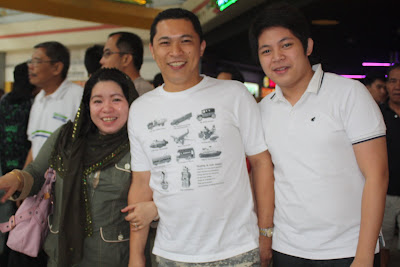 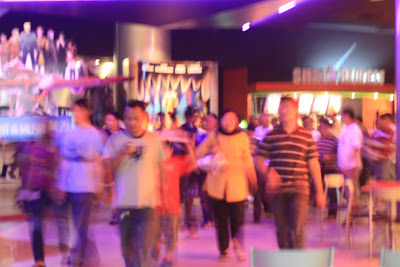 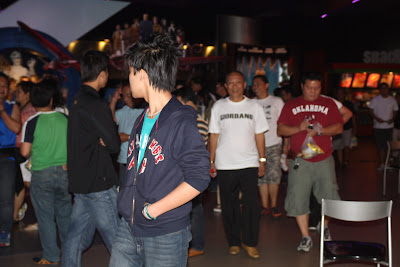 but i wanted it more bloody so i could tell hatton "bloody hitman!!!"--in a brit accent :P

Yeah Pacman kick some english but LOL. The fight was short but o so sweet. I love it.