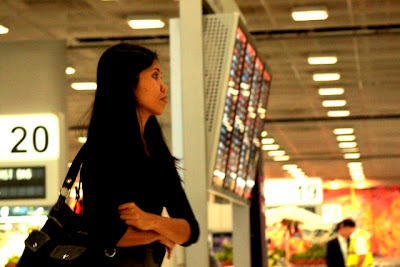 Long distance relationships is not challenging...it is a challenge.
It happens when crazed-and-intimately-attached- lovers decided to be in a binding relationship regardless of the existing endless water and mass of earth sitting like a plump fairy between them. But this plump fairy is not very accommodating with wishes, it is hard as a rock, deep as the abyss, and frigidly cold as that raw meat in the freezer.
It doensn't let you cross it for free. Arline tickets and cruise packages are extremely expensive that the word "filthy rich" and "robbery" comes to mind often.
It won't even let your voice pass without a fee.
It has numerous toll gates.Conflicting bodies of government.And landmines waiting for some fool to play with it.
Not to mention warring parties with deadly nuclear weapons that can destroy the earth 7 times. Duh. You can only destroy the earth once. Once it blow, everything disintegrates rendering the other 6 useless... hoookay? well if , and only if, by some miracle everything disintegrates and the 6 remained intact, nobody will be alive then to miraculously push the button of destruction once again.
The END-OF-THE-WORLD episode of our lives can only happen once, and its so absolute that nobody will be left to say "Bravo! Magnifico! that blow really blew me!". So let me tell it in advance to the genius, whoever he/she may be, wherever he/she may be located.

"congratulations for making sure everybody die an equal death, may we all rest in peace"

With all these lunatics between us, storms and climate changes, taxes and VATs, not to mention wild animals on the prowl, both four and two-legged...long distance relationships become a rock-climbing, off-road expedition of mixed emotions and frustrations that sends us crashing head on.
And so, lovers' break down because others just break away.

But does distance really have to do with it?

I've seen couples not torn by different timezones and geographical obstacles act as if they have a black hole existing between them. One can be so near yet so out of reach at the same time.
But blame it to the world becauase the world doesn't complain.
Never mind that our pride is more difficult to climb than its highest mountain.
Never mind that we become fickle minded, swaying more than the wind that courses through the trees.
Never mind that our anger is far more bitter than the storm that wrecks the fields.
Never mind that our eyes wander like a stranger sometimes.
Never mind that we sometimes take the slightest offense as a mock reason to create an impenetrable wall to those closest to us.
Never mind that we sometimes create our own world where no one is allowed to set foot upon.
Never mind that we sometimes wage an invisible battle where enemies are meant to lose no matter what.
Blame it to the world because it can only whistle its heartaches.
because its rain drowns its pains and tears.
because it survived the weathering changes of time, making it even stronger and beautiful as lovers continue to grow apart.
Yes, blame the world as our madness takes us to the edge of sanity as we collectively create and destroy cities in the name of pride and love.
But if you really want to test your capacity to endure a long distance relationship, be a priest.
Submit yourself to the "holy marriage" that requires absolute obedience and fidelity.
Where your partner is omnipotent that sneaking out to party at night and going home with a lame excuse of overtime will be just that, LAME.
And arguments are out of the question.
So jealous that being everywhere is not even enough that spies and assassins in the form of demons and angels are being sent and instructed to remind you of your sins with visions of hell to instill fear in your heart.
A partner that neither believes in telephones nor customer service.
A partner you cannot woe with chocolates and flowers.
A Partner that you cannot shout at (well, you can always try).

A Partner you cannot stand to lose.

Where communication will always be like an exercise of patience because it's like being on hold forever with intermittent flashes of light to daze you with constant subtle reminders and threats of hell sung in a melody of a song that is longer than "stairway to heaven" to keep you company while you wait for the operator to come.

Where distance does not only exist, but another plane of reality stands in the middle of it all. This time the fairy is far more cruel in its collection of taxes. Where you pay with your everything including your sanity.
And unlike the plump fairy called THE WORLD, it will only allow you to point your finger towards yourself --blaming your imperfect existence is the only option.

Bummer if God doesn't really exist.
Double bummer if he does and you committed adultery.

guess whats in my mind now :P
lets make a dating/relationship site and lets make ourselves love consultants haha! just a crazy thought, whats a good advice if we cant really put our feet into the troubled shoes.
im no expert with ld relationship, but its indeed a challenge, status could change in an instant-like mine. what i love about it is the freedom:P yet theres trust, appreciation, communication to consider.
how bout you leah?:)

what?! you not an expert?! you"re the been-there-done-that gurl in relationships.

i've been in 8-year marriage even before i got my first boyfriend, who is my current now...so that makes me a what? wahehehe incompetent but capable nonetheless... hahah!

im on.. let's do that site you are thinking of. let's do the world a favor...(or wreck a havoc amongst lovers =P - ooops)

shut up there leah :P i didnt know id get you this serious :D well, im indeed excited:D ok ok, lets storm our brain, oh what a rambled term :P