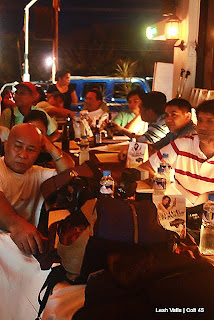 It's nice to be back in Davao again and hang out. Last night was Colt 45's Vavavroom Party...0f course, moi decided to go to take a peek at the beautiful Christine Reyes. I didn't really know that Colt 45 rebranded and did some reformulation. The new taste is actually very nice. I like it. The only brand I've been into for years is red horse...guess I have two favorite drinks now ^.^
The night started with a press conference with Christine Reyes in Damosa's "A taste of Malaysia" Restaurant. Even if I was late, I was seated in front, ok i stole the seat and ended up chatting with the KBP President...coolness.
and I won a cup...wahahhaah! **ang babaw ng kaligayahan...nyahahah! scroll down for some fun shots below ^.^
I was with Doc Charles of Why Not Coconut and Kevin of Pinoy Teens  Richard, and Mark.
One of the best photographers of Davao, Rene Lumawag (or tatay as we call him) caught my attention when he dropped his lens...good thing it did not broke =)...the usual ABS-CBN and GMA people are there also.
But what really surprised me was to find out that a friend of mine, LILY, was one of the organizers and is the one handling the COLT 45 Event. *double weeeh! Okay imagine me in my truck rushing, a.k.a. driving carelessly, towards the last spot in front of the restaurant... all disheveled, clutching my camera and trying to fix my hair only to shriek because I unexpectedly saw a friend...and to double shriek after she told me that she is part of the organizing committee....*laughs.
I am sooo stupid sometimes.I thought she was only doing gourmet ice cream! Didn't know she is into advertising! Oh and her ice cream is superb! She came from the family who started the "dirty ice cream" business in the Philippines. Will have to feature it in my blog soon ^.^
W were given VIP Passes after the conference weeeeh! Ate Neng was super glad to know Raimund Marasigan of Sandwich will be there as well as the one year old band, Hilera.  I was tasked to ask for his shirt...hehe. I did not dare ask...but i coordinated with certain people to steal it for me...told them to send it to me via parcel...**crossing fingers. Hope it arrives soon! hahaha!
Nice to see old friends and familiar faces.
Nice to be back in Davao ^.^
Needless to say, I had a great night!

worshiping the beer tower with lily

with manong brando, bodyguard of the night ^.^

negra with the mestiza ahaha!

we love you beer tower!

How many bottles did you drink?

Great! Even my husband booked one of the Chicago venues like this for my birthday. It was a surprise party and he invited all my friends on the day. I never thought that they would travel so much just to be a part of my special day. I love everybody for that.