Baseco, the land of no names. 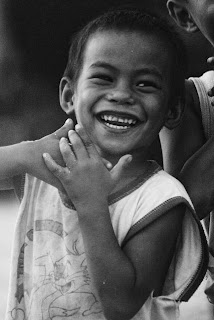 After commuting via bus, jeepney, and tricycle, I arrived at the infamous place called Baseco in Tondo, Manila.  The big trucks, the crowd, even the way the shacks are placed are not foreign to me. It maybe my first time in Baseco, but it is not my first time to visit a crowded impoverished community like this.
Doesn't matter if its the first time or the nth time, places like this will always be overwhelming.  It is something that one just cannot be immune to, no matter how many times one visits squatter communities.
I saw half naked children playing on the side of the street oblivious to the dirt, pollution, and stench.  Mothers cooking their meals outside their humble abode.  Endless sari-sari stores selling junk food and drink.  Gambling teenagers.  Shouting fathers.  Even a sleeping dog with a cigarette in his mouth!
I trudged on a cement trail that probably witnessed countless evolving lives of the residents.  The mute witness of the routine of the people who relentlessly fight to live their lives the way they only know how...survive.
The trail seemed endless, just as the problems of these people were.
The path was small...too small for the people to hope for.  One has to get out of this place if one wants something right to happen to them, i silently thought to myself as I walk pass by them...  But who am I to say that what they have is not a good thing?
Why is it so bad? Having a home to go home to, friends to call upon, family to  belong to...
They waved and smiled, and trustingly posed for the camera, never hesitating even if the one who is taking it is a stranger... They laugh at little things, get delighted at small gifts they find in the garbage along the shore, so easy is laughter to them, I noticed...They do not burden the stranger with any sorrow that is lodged between the armpits of their lives.
I have met families who have houses but cannot seem to buy the warmth it needed.  Fathers who've lost their sons in video games and drugs.  Mothers who fill the void of being needed by shopping useless gifts that their children take for granted.  How can one have everything they wanted and end up needing so much more than the impoverished family living in the squatter area? 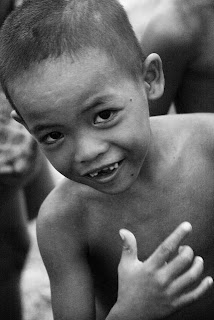 Before finding my way on this trail, the president found his way to the tribunal where he would recite his State of the Nation Address.  But his was prepared in red carpet with countless guards to protect him.  With people in their best dresses, better than the best Sunday dress the people in the slum area could ever have.  Women in beautiful gowns and elegant jewelry that people in Baseco would have to work for all their lives..and would die trying...before they could even own one...if they ever get to own one.
The president delivered his speech...and life went on in the slums...
And I'm thinking to myself, how extravagant the preparations were made so that the president can deliver his less-than-an-hour speech.  How elegant the dresses the people who attended it. How tight the security, when these people live without having to lock their doors...because there is no door.  How important this event is deemed...
Sometimes, it makes you wonder...
Why there are no celebrations to show the courage the squatter folks have.  No dinners to commemorate how industrious and creative they live their lives amidst financial difficulties.These men know how to earn a living in ways the president couldn't imagine...but howcome no one applauds them?  Even opportunities to be heard have been denied to them so many times because they were in this side of life where their voices, no matter loud, are not heard.  Or even a small project to clean the beach?
Maybe soon...sooner, I hope.
posted by 13thWiTCH at Friday, August 06, 2010

Email ThisBlogThis!Share to TwitterShare to FacebookShare to Pinterest
Labels: Baseco, manila, other side of sona, slum, street shoot, tondo

Fastastic black and white photos, looks like a documentary film, I wonder how it will appear in sepia...Dorothea Lange incarnate lives again and ressurects from Davao...great job my Lord....

ALthough I also admire your photos I find your words to be even more compelling. The photography does take on a much more human face and becomes infinitely more poignant. I dont find it surprising at all that you could draw such contrasts in these words. Your day, that day, was a day filled with contrasts too great to be ignored yet we both know that contrasts, these contrasts, exist every day, all day. They are invisible to us almost always, all day every day. Thanks Lay. Thanks for going there. I hope, in a small way, I hope, in great ways, you are able to affect change. When you decide to complete your project put a copy aside for me. I shall make arrangements through RV to get it into the hands of Roxas. ANother mouth close to the ear of the Pres. Another ego with ambitions. Perhaps the people of Baseco can best be helped by becoming a project of the powerful! Look voters, look at me, I care more than he does. Sorry for being cynical in the end but that will never stop me from helping you in such a worthy cause.